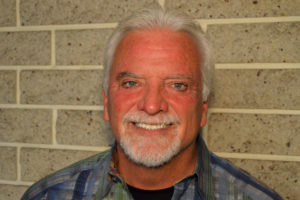 I was raised the youngest of four children in a middle class family just outside of Los Angeles. We went to church and lived a fairly uneventful lifestyle (no drinking, drugs, porn, fighting, divorce, etc.). I pursued my passion for journalism in college, and soon became a successful newspaper reporter. At the same time, however, I rebelled and dove into the world of drugs and alcohol. When I emerged, God was in the center of my life and leading me in a new direction of helping others who were hurting. My wife (Charlotte) and I started helping people in the church, and I went back to school for my master’s degree in counseling and soon found myself in Reno at the Gospel Mission. I was made to do this.

What do you do at the Mission?
As the Executive Director, I oversee all of the operations, which include the Mission, a warehouse, men’s home, women’s home, four thrift stores, a church and recovery program. I’m also the pastor of Journey Church, which meets at the University of Nevada, Reno. I teach, I preach, I counsel. Like everybody here, I do what needs to be done.

Tell us about yourself.
I’ve been happily married to a beautiful woman for almost three decades and we have four incredible kids. We love to travel, and my wife and I often speak at churches and conferences as part of another ministry we lead called Enjoying Marriage.

How did you end up at the Mission?
I had been just been burned by a so-called Christian social services agency and I was almost down and out. It was a crushing time for me. I kept asking, “God, why did you bring me to Reno?” But when I stopped my doubts, God told me to look at the employment ads. I saw one from the Mission looking for a writer — the only day they ran the ad, too. Had I rebelled one more day I would have missed the ad. So, I called about the job — and 20 years later I’m still here.

What is one thing about you that surprises people?
That I really don’t like crowds. People think I do because I preach and do public speaking all the time. Honestly, that’s God, because I’d prefer to be home.

What hobbies do you have?
My No. 1 hobby is my wife. Dang, I really love that woman. I also like racquetball and working out. Then there’s my weird fascination with used bookstores.

What is your favorite movie or television show?
I’m an action movie kind of guy, so pretty much anything from Die Hard to the new Batman, Iron Man and the like. As for TV, I’m a zombie fan watching Walking Dead and Fear the Walking Dead.

What is the best criticism you have ever received?
A wise pastor once told me to “Shut up and act like a man.” That was truth. I’ve applied that wisdom to so many areas of my life, from my marriage to ministry.

What do you consider your biggest success?
I think I’ve been a good husband to my wife and a good father to my four children.

What is the most influential book you’ve read besides the Bible?
Experiencing God by Henry Blackaby.

Who has most impacted you on your spiritual walk?
My wife, Charlotte (see next question).

How did you come to know Christ?
Early in our marriage, we were struggling. Charlotte went back to church and started following Jesus. I had never seen so dramatic of a change in someone. I knew then that God was real and I wanted what she had. Not a religion, but a true relationship with my Creator.

Which biblical character do you identify with the most?
I’d say David. He was a go-getter and on fire for God. But his passion and emotions often were his greatest challenges (and downfalls). I read Psalms and he’s all over the place. I feel that way, too: My love and commitment for God never wane, but I wonder why He allows things to happen and where He is sometimes. Like with David, God always says to me, “Do you trust me?”

What is your favorite memory at the Mission?
There are so many individual moments with clients, but I’d have to agree with the others about the graduations. They are incredibly emotional times of healing and reconciliation. It’s impossible not to get emotional watching a changed life.

What do you like most about being part of the Mission team?
We really work as a team. To me, it’s a great example of the body of Christ in action. Everybody has a role and we set aside any differences to fulfill that role. I’ve never seen anything like it.

Why the Gospel Mission?
The people who come to us are hurting. They’re down. They’re desperate. They’ve tried and failed at most everything in life. And then we introduce them to Jesus. It seems everything — I mean everything — about them changes. Their life is never the same. And the course of their family’s history is also changed by dumping an addiction and bringing God into the family tree. We have the opportunity to introduce them to the God who changes lives. I can’t think of anything else I’d rather do.

Stay in the know